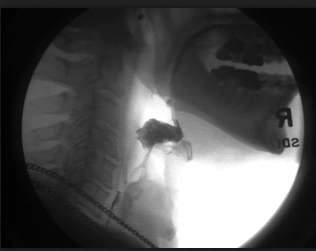 Dysphagia (swallowing difficulty) is a serious medical condition that affects between 300,000 and 700,000 individuals in the United States each year. Although 1 in 6 adults report experiencing dysphagia, only 50% had discussed their difficulty with a clinician (Adkins et al, 2019). It is likely that you or someone you know will experience dysphagia.

Common signs and symptoms of dysphagia in adults include, but are not limited to: unintentional weight loss, coughing during or after meals, recurrent lung infections, liquid/food coming out of nose/mouth, liquid/food coming back up into mouth or throat after its been swallowed (regurgitation), avoiding foods once enjoyed, and feeling of food remaining “stuck”.

Dysphagia is a symptom caused by various diseases/conditions, which in adults, include: head and neck cancers, pulmonary conditions (e.g., chronic obstructive pulmonary disease), and a variety of acquired neurologic conditions such as stroke, dementia, ALS, and Parkinson’s disease. Unfortunately, swallowing symptoms may develop gradually over time and so dysphagia often goes unnoticed and underreported.

If you are having difficulty swallowing, notify your primary care physician or neurologist who will refer you to appropriate professionals which may include: GI (gastroenterology); ENT (Ear Nose, and Throat), and Speech-language pathology.

NFOSD is a grassroots organization whose purpose is to provide patient hope and improve quality of life for those suffering from all types of swallowing disorders, by enhancing direct patient support, education, research and raising public, professional, and governmental awareness. Please visit their website to learn more.

From politics to religion to patient care, underlying values serve as a screen for the actions everyone takes on a personal and professional level. Dysphagia treatment can often bring up situations where there is conflict between what a therapist is recommending and what a patient or family is doing or requesting. A patient with documented aspiration and history of aspiration pneumonia, for example, may refuse a therapist’s recommendation for a feeding tube, and instead, choose to eat and drink orally, despite the risks. Conversely, a therapist may recommend against placement of a feeding tube for a patient with severe dysphagia secondary to late stage dementia, citing literature that a feeding tube may add little benefit to quality of life, and yet, a family may insist on feeding tube placement.

When speech-language pathologists or other health care professionals are presenting the benefits and risks of various treatment options, they must be aware of the fact that their own values or cultural bias may conflict with the patient’s choices or a family’s decisions. Before any of us can understand how a decision is going to impact treatment, we need to understand our own values and how they match with those of our patients, recognizing that sometimes they do not align.

An Advance Directive is a written statement of a person’s wishes regarding medical treatment, often including a living will, made to ensure that their wishes are carried out should they be unable to communicate them to a doctor.  These documents are not just for people with a terminal illness, rather, they are for all of us. Advance Directives provide an opportunity, while healthy, to reflect on our values, think about what we deem as a life worth living, and what medical treatments we might or might not accept. And, of course, we can always change our mind.  Whether you are a patient or health care professional, completing a Values History form can help to clarify the values and beliefs that influence and guide your decision making.

There are various values history forms which can be downloaded at no cost, and I have incuded a link to one here: https://cdn.ymaws.com/www.hospicefed.org/resource/resmgr/hpcfm_pdf_doc/valueshistoryform.pdf

Living a Principled Centered Life: lessons from my father

From time to time in a blog post I have talked about my father. I have shared with readers that in his later life, he lived with the symptoms of Parkinsonism. His physical symptoms were a challenge for him and my family, and even though he spent much of his life doing favors for other people, he hated asking for help as his own physical abilities declined. He died in 2001 at the age of 83, having retired just three years earlier as Mayor of the Village of North Randall, Ohio, an elected position he served in for 42years.

This week, with all of the racial tension and turmoil going on in our country, I have been thinking about my dad, and the choices he made as Mayor of a community, that would eventually shift from all white to predominantly black.

Sometime during the 1970’s, the communities surrounding my father’s Village began to become integrated, and as black families moved in, “white flight” began. Many of the white families who fled, were members of the  church I grew up in, leading me, as a teenager, to question the hypocrisy of their actions which were in opposition to their Sunday prayers and the teachings of Jesus they professed to follow.

When the first black family moved into the Village, my father made a choice. He went to their home, and welcomed them, beginning a ritual he would continue until his retirement. As time went on, whether at a celebratory event like his 65th birthday, his retirement, or his funeral, the black friends and families of his village were always present, showing a genuine love and respect for my dad.

It would be unfair for me to say that my father, an Italian-American, grew up without any prejudices. After all, who among us does not have bias and prejudices of one sort or another? But what I witnessed in my dad, was the conscious choice he made to treat other people the way he wanted to be treated, which was fairly and with respect. He had an ability, sometimes to a fault, to choose only to see the good in other people.

I hope that as individuals and as communities we can make a conscious choice to be peacemakers, to be kind and respect the dignity of every human being. 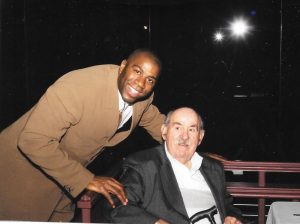 In 1999, Magic Johnson opened a movie theatre at Randall Mall, and although my dad was near the end of his career as Mayor, I know how happy and proud he was of the business growth and the basketball legend that had come to his little village.