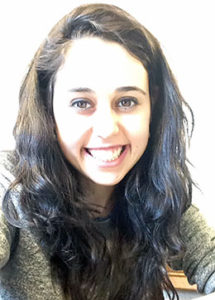 The Voice Aerobics® graduate student scholarship is awarded annually to a student who demonstrates character traits and intention to make a positive contribution to the field of Speech-Language Pathology. The 2016 recipient is Jordanna (Jordy) Meisler Sevitz, a first year graduate student at Teachers College, Columbia University, New York, NY.

When asked to describe, in 50 words or less her interests and passions in life, Jordy responded: “Connecting with people and learning about different cultures and traditions. I love the Zulu language and am fascinated by the culture. The spirit of Ubuntu*, inherent to Africa and its indigenous tribal people, represents a deep caring and commitment to help one another, a life value I strongly identify with.”

Jordy went on to say that after graduation she hopes to return to South Africa where she has family connections, and to “give back to the community and provide speech therapy to those in rural areas who don’t know that rehabilitation exists and that regaining language following trauma is possible. Wherever I go, I will carry on the spirit of ubuntu by helping others become prouder communicators.”

The student scholarship award was begun as a way of giving back to the profession that I love, to support clinicians who represent the future of the field and as a way of affirming the continued success of my own business.

Thank you to everyone who took the time to submit an application. Acceptance of applications for next year will begin March 1, 2017, with a deadline of April 30, 2017.

*Ubuntu is a Zulu word translating to “human kindness.” It is an idea from the Southern African region which means literally “human-ness”, and is often translated as “humanity towards others”, but is often used in a more philosophical sense to mean “the belief in a universal bond of sharing that connects all humanity.”