Speech therapy for individuals with Parkinson’s disease should take into account their listeners.

(A message to my readers:  I have decided to eliminate a monthly newsletter, and instead, utilize my blog as a venue for discussions, upcoming events and product information. I created my first blog post on Blogger.com over 3 years ago, and have published over 300 posts on various topics related to the patients I serve. My blog posts reflect the heart and soul of what I do everyday as a speech-language pathologist, and my writing probably provides the most transparent picture of the passion and purpose that motivates me. Sometimes I will share relevent research and at other times, my opinion, but either way, I hope you will enjoy reading the posts and communicate with me via your comments and feedback. – Mary Spremulli,MA,CCC-SLP, Owner, Voice Aerobics)

Hypokinetic dysarthria refers to speech and voice changes that are said to affect 50-89% of people with a diagnosis of Parkinson’s disease (PD). The insidious nature of Parkinson’s may  contribute to a patient’s faulty perception of their own speech, as changes in the motor speech mechanism likely come about slowly over years, causing individuals to adapt and not recognize the changes in volume and clarity which may be  noticed by others.

Whose Problem is it?

Most speech-language pathologists who work with patients with a diagnosis of Parkinson’s, have heard a typical comment from soft spoken patients, who, in defense of their speech say: “my spouse can’t hear.” Although couples will often laugh when this disparity of speech perception is discussed, the reality points to a sensory-perceptual disconnect for the person with Parkinson’s causing them to misjudge their actual speech volume. The mismatch between how a patient sounds and how they think they sound has been investigated by researchers and has been attributed to an impaired ability to judge self-effort in relation to motor tasks, while others attribute it to an auditory perceptual deficit. Most research related to speech therapy techniques for persons with Parkinson’s has focused on the effect of modifying various aspects of speech production such as loudness or rate. Very little attention, however, has been given to whether or not primary communication partners (i.e. listeners) also perceive a benefit from modifications to the patient’s speech.

A cognitive-perceptual approach of speech remediation has been investigated in persons with Parkinson’s. [i]This bi-directional approach looks not only at aspects of the patient’s speech that cause a reduction in intelligibility, but also considers what efforts the listener must undertake to comprehend dysarthric speech. If listeners do have a hearing loss or conversation takes place in a noisy environment, those factors will interact further to increase effort for both the speaker and listener.

When seeing patients for an initial speech and voice evaluation, I typically administer the Voice Handicap Index (VHI-10), a 10 statement screening tool, which helps obtain an idea of a patient’s own perception of their voice problem. Recently, I have begun asking the patient’s spouse or significant other to also compete the VHI-10 without conferring with their partner, and the similarity of responses has been an interesting finding.

A couple married for 62 years came together for a Parkinson’s patient’s initial evaluation. Both completed the VHI-10 separately, but when their scores were reviewed, they were exactly the same; not only their total score but they also scored individual items the same. (Items are scored from 0-4 with 4 being the highest agreement with the statement). The following is an example:

The patient and his spouse both gave it a score of 3. But when we discussed their responses afterward, the patient indicated that his score represented the effort it took him to speak in a noisy room, such as a restaurant, while his spouse reported that her score reflected the amount of difficulty she had communicating with the patient in a noisy environment.

What these observations suggest is that speech therapy for individuals with Parkinson’s disease needs to also incorporate the patient’s spouse or significant other. While we may be able to obtain acoustic measures that document an increase in vocal intensity in response to therapy tasks, we need to know if the patient’s primary communication partner also perceives an improvement in speech production across a range of settings.

Speech therapy for persons with Parkinson’s should not be a one size fits all, and consideration of the communication partner/s perceptions may help to identify the best method for any individual patient, which might include: behavioral treatment such as LSVT® LOUD or SPEAK OUT! ®, a speech  device intervention such as the Speech Vive, amplification, or some combination of approaches. 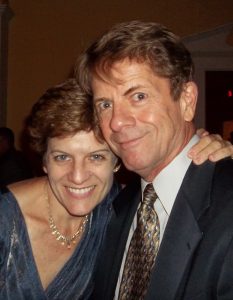 Kelly and Pete  began a local support group in Punta Gorda, Florida and continue to inspire members of the Parkinson’s community with commitment to their relationship, exercise, and helping others living with PD. Listen to my 2015 recorded interview with Kelly and Pete. https://www.blogtalkradio.com/voice-aerobics/2015/04/17/starting-a-parkinsons-support-group