Can Breathing Too Much Makes You Sick?

Would you be surprised to know that you can breathe too much, causing physical symptoms? Breathing is generally taken for granted, going on without our supervision. We breathe more during exertion such as exercise, and we have a strong reflex to prevent suffocation. But, when psychological factors dominate over the physiological, breathing may become disrupted and deregulated. The result can be over breathing or hyperventilation. Hyperventilation is defined as breathing in excess of our current metabolic needs. For some people, just one minute of over breathing can cause physical symptoms such as: cold hands and paler skin, lowered muscle contractions resulting in twitching, and altered blood flow to the brain with changes in sensory perception, balance, or thinking.

When hyperventilation symptoms cause chest tightness, lightheadedness and anxiety, a person may end up in the emergency room fearing a heart attack, only to be sent home being told their symptoms were “nothing more than anxiety.” Re-assured that their symptoms were not anything serious, the person may happily go on their way, until another episode of hyperventilation occurs. Re-occurring episodes may lead to panic attacks or other disabling symptoms.

How can breathing too much cause so many physical problems? Carbon dioxide (CO2) is a waste gas that we release with each exhalation (breath out). Besides releasing waste products, carbon dioxide has important role in the body, and that’s regulating the ph of our body (acid/alkaline balance). If breathing is not sufficient for the body’s needs, as can happen with some pulmonary diseases, we may build up carbon dioxide (hypoventilation). But even in non disease states, if we breathe out more CO2 than we produce, hyperventilation occurs.

There are times when hyperventilation is needed, and in fact, our body has been pre-wired to prepare for physical exertion or to respond to a threat. Think of the deep breath you take before lifting a very heavy box. The breath hold is necessary to help with the physical movement, but if breath holding becomes a habitual way of breathing problems arise. Similarly, we can probably all relate to the irregular pattern of breathing that precedes or accompanies crying or sobbing. In fact, “holding a cry in” usually makes our throat and chest feel tight, and if this became a habitual pattern, as it does for some people, when it is activated by thoughts or emotions, chronic hyperventilation and disordered breathing may be the result.

So, as you can see, disordered breathing patterns can arise from a variety of causes, some medical, some musculoskeletal or postural, and some resulting from psychological or emotional interactions with our body.

Breathing Training Techniques Can Help with Self-Regulation of Breathing

Diaphgramatic breathing, yoga breathing, purse lip breathing and respiratory muscle training using a handheld device,are among techniques that have been studied as offering benefit for individuals with breathing problems. Purse lip breathing, which requires no equipment can help individuals to increase of exhalation time resulting in a decrease in the respiratory rate and breathing more deeply.Yoga breathing also focuses on deeper breathing but often in combination with relaxation and body position.The principle of inspiratory muscle training is to improve the strength of the diaphragm and the external intercostal muscles, and evidence shows that improvement of inspiratory muscle strength might be related to decreased effort in breathing and a positive change in the experience of breathlessness. (Inspiratory muscle weakness has been identified as being common  in patients with early-stage Parkinson’s disease).

The Breather® is a flow resistant respiratory muscle trainer. Turning the dials creates resistance to airflow on inhalation or exhalation, providing weight training for the breathing muscles in much the same way weights are used for skeletal muscles.Several studies which provided feedback control of flow rate during RMT resulted in effective benefits, with particular regard to strength, dyspnea(shortness of breath) and physical exercise tolerance. Inspiratory-expiratory muscle training when used with patients with speech and swallowing problems may provide a strength training benefit that can support voice use and improve the timing and co-ordination of breathing and swallowing. 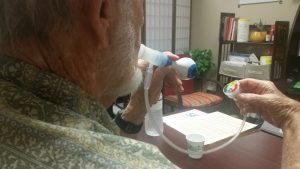 Dave uses The Breather with a manometer for targeted training and feedback.

Several years ago, Dr. Christopher GIlbert, co-author: Recognizing and Treating Breathing Disorders joined me for a podcast when we discussed anxiety, pain, and disordered breathing. If you would like to listen to the interview, just follow this link: http://www.blogtalkradio.com/voice-aerobics/2015/06/26/anxiety-and-pain-and-influences-on-breathing