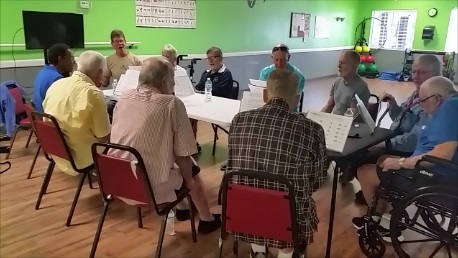 At last week’s weekly speech class, The LOUD Crowd, I asked each of the members to share a communication challenge and a goal for improvement. Interestingly, 6/12 people reported “anxiety” as a major contributor to their speech and communication difficulties.

Anxiety, which can be described as excessive worry, apprehension or nervousness, can be experienced through physical symptoms, such as shakiness, rapid breathing or dizziness, or it can present as a specific fear, such as a fear of social settings or large crowds.

Anxiety is not unique to Parkinson’s disease, but its prevalence is cited by researchers to occur in up to 40% of patients with PD, with this rate being higher than in normal or other disease comparison populations and current evidence suggests that anxiety may not be a psychological reaction to the illness but rather may be linked to specific neurobiologic processes accompanying PD. [i]

In a fall report published by the Parkinson Alliance, 26% of respondents to a survey reported that anxiety was present prior to the diagnosis of PD, and 35% of the participants reported experiencing moderate to extreme generalized anxiety. [ii]

But what does anxiety have to do with speaking?

Coordination and thinking problems can occur to any of us when the body becomes abnormally stressed, and in addition anxiety can cause changes to breathing patterns which can contribute to voice and speech difficulty.

The relationship between anxiety and speaking has been studied in other groups of people, in particular individuals who stutter, and while the relationship between anxiety and stuttering is complex, the research has reported a high rate of social anxiety disorder among individuals who stutter. (Social anxiety disorder is defined as a prevalent and chronic anxiety disorder characterized by significant fear of humiliation, embarrassment, and negative evaluation in social or performance-based situations.)[i]

Unlike an adult who has stuttered from early childhood and possibly experienced a life time of anxiety related to speech performance, most individuals with Parkinson’s report communication skills that were within normal limits prior to their diagnosis of PD. And, in fact, some  individuals with PD who are the most distressed about their speech are those who spent much of their career in professions such as sales or teaching, where their prowess in communication skills contributed to their success.

Social anxiety can become a bit of a chicken-egg dilemma, with anticipatory anxiety,  that is fear of being judged negatively ahead of a situtation, adding to or worsening the problem.

Individuals with PD, who may be experiencing anxiety, should first, speak with their neurologist about their symptoms, as medication may be available which can be helpful. If social anxiety extends beyond the ability to successfully communicate, working with a psychologist can also be of benefit.

But, for those individuals, like the members of my speech class, who cited anxiety specifically as it relates to communicative effectiveness, a speech-language pathologist, knowledgeable about Parkinson’s can be of help. Improving  communication skills with a broad focus, meaning, including not only speech clarity, but attention and listening, and formulation of thoughts, may help to reduce anxiety associated with speaking. Practicing communication skills in a safe, small group social setting with other individuals who also have a Parkinson’s diagnosis can also yield benefit.

I always advise new members of our weekly speech class that it is a working group. By that, I mean, we do not sit around and discuss Parkinson’s disease, rather, we come together weekly much like a Toastmasters group, focusing on all aspects of communication and garnering for each other support and honest feedback. Hopefully, the success experienced in  group can transfer to everyday situations.

Voice Aerobics®, a 90 minute community-based class, sponsored by Neurochallenge Foundation, is offered monthly, the 4th Thursday of the month in NorthPort, Florida. This is a free class open to anyone with a diagnosis of Parkinson’s disease. Carepartners are also invited to participate.

For additional information or to contact Voice Aerobics visit: https://voiceaerobicsdvd.com/voice-aerobics-private-practice/