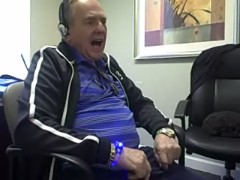 Most behavioral speech and voice treatment approaches for patients with Parkinson’s disease (PD) depend on a conscious response from patients to self-monitor some aspect of speech production such as vocal intensity (loudness) or speech rate. However, research examining response to voice therapy in patients with a diagnosis of Parkinson’s, has revealed that for some, improvements attained in the therapy setting may fail to generalize outside of the therapy room to everyday conversation, leading researchers to point to associated problems of cognitive-perceptual deficits. Patients trying to self-monitor loudness of speech often say: “it’s not automatic,” and, in fact, they are exactly right.

Loss of the automaticity of speech coupled with cognitive changes can result in patients who are “willing” but not “able” to do all that is expected of them when communicating in the complexity and demand of everyday conversation.

A study by voice researchers of healthy subjects found that when speech practice contained tasks viewed as having a “low level of cognitive load,” such as reciting days of the week or months, individuals were more easily able to devote some of their attention to self-analysis and self-monitoring aspects of voice and speech production. In contrast, spontaneous speech, also called novel speech or voluntary speech, refers to newly created, extemporaneous utterances; similar to what is required for participation in conversation. Such speech is assumed to involve a larger amount of communicative effort and attention to content than rote speech and this type of effort can easily distract patients from maintaining dual focus of attention on both content and some aspect of their speech and voice behavior they are trying to modify. The study authors concluded that patients attending behavioral voice therapy may have a better chance of successfully adopting new behaviors in exercises with a low degree of distraction due to content.

Understanding  the relationship between cognitive load and speech-language planning/production is an important consideration when developing a treatment plan for individuals with speech and voice impairment related to Parkinson’s disease. Patients who have  been identified as having some memory or other cognitive problems may struggle  with self-monitoring of speech as the cognitive demands increase, and alternatives to conventional speech therapy, such as a speech device intervention may be a more realistic and satisfying option.

The Voice Aerobics® family of products were developed to help patients practice on their own, at home, or wherever they go. Programs are guided, so there is nothing to remember. Just practice and have fun!

Hi-VOLT® 4 PD is a 27 minute audio recording of guided voice practice. Tasks are presented in a simple, hierarchical fashion from words to longer sentences. It was designed to be used with the Hi-VOLT® voice-on-light a calibrated feedback tool. With a simple cue “speak loud enough to activate the light,” feedback can help patients reach a target and feel more successful during home practice.

SpeechVive is a device intervention developed at Purdue University. The programmable device is fitted to one ear, and delivers babble noise, which in turn elicits the Lombard effect, causing users to speak louder over the background noise. Some users experience an instantaneous effect in loudness and speech clarity. Recent research conducted by Dr. Jessica Huber reported that when using the SpeechVive, Parkinson’s patients used breathing patterns similar to the non Parkinson’s control group, suggesting that for many Parkinson’s patients the speech mechanism is still capable of being used normally, and speech problems may be more attributable to a cognitive-perceptual dis-connect. Device interventions are now another option for improving the motor speech symptoms associated with Parkinson’s disease.