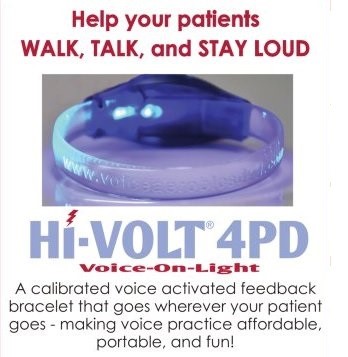 “This feels too LOUD.” I feel like I’m shouting.

Over the last 30 years of working with individuals with Parkinson’s disease (PD) I have heard the statements above so many times, that you almost believe that it is one of the hallmark symptoms of PD.

Researchers in motor speech and voice, have suggested that there is a deficit in self-perception of speech that is manifest as an overestimation by speakers with Parkinson’s disease of their own loudness (usually in the presence of reduced loudness of their speech) and/or a perception by individuals with Parkinson’s disease that they are shouting or producing abnormally loud speech, when asked to produced speech of normal loudness, as judged by a speech-language pathologist or another nonimpaired communication partner.[i]

Another common observation is the ability of individuals with Parkinson’s disease to improve their loudness (and other aspects of speech production) in response to external cueing or when prompted to do so in a clinical or laboratory setting, so therapy approaches have focused on methods designed to help the individual self-cue. Frequently, however, many individuals return to reduced loudness and poorer speech production upon leaving the clinical setting. The evidence of this often can be heard in the comments from a spouse or significant other who reports: “he/she doesn’t do at home what they do in therapy with you!”

Home practice is an important component of most speech therapy protocols for PWP, but is it realistic to expect an individual whose underlying problem has been cited as reduced perception of speech to practice on their own at a high enough level of effort to strengthen their voice?

Therapists often engage in a lot of verbal cueing during a treatment sessions coaching and encouraging the patient with statements such as: “be louder,” “use your loud voice,” “speak with intent.” And, while the goal for most treatment protocols is for the patient to internalize the cue, and in a sense, be their own coach too often, a failure to maintain a more normal level of loudness outside of the therapy setting may be in response to the absence of an external cue as well as the demands and complexity of engaging in conversational speech in a variety of settings.

The inability to accurately perceive speech and calibrate to a more normal level of loudness can be particularly difficult for persons with Parkinson’s (PWP) who also have some degree of cognitive impairment. This is not totally surprising since a decline in executive functions including attention and concentration, will no doubt confound some individuals given the complexity of conversational speech which demands that we process information, formulate novel thoughts, AND speak with normal loudness and clarity so as to be understood by others. 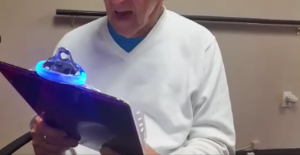 The Hi-Volt® is a calibrated, voice-activated feedback tool that may help some patients perform speech practice more efficiently on their own and help them feel the effort they need to use to generate a loud enough voice for some strengthening to occur. Frequently, it is introduced during speech therapy treatment, with a single cue: “speak loud enough to activate the light.” At home, the patient can use the Hi-VOLT® during their speech practice, or, because the light is housed within a bracelet, use it during physical therapy as an external cue for loudness when counting exercise reps.

Using LSVT® Companion software, acoustic data was collected on 99 patients at the time of their initial speech assessment. Patients performed a series of tasks un-cued, and cued, using the Hi-VOLT® light and a single cue: “be loud enough to activate the light.”

Re-calibration to more normal perception of speech/voice is the desired outcome from most speech therapy protocols for persons with PD, and feedback tools which patients can utilize at home on their own, may help them practice more effectively and improve or maintain strength of the respiratory and phonatory muscles.