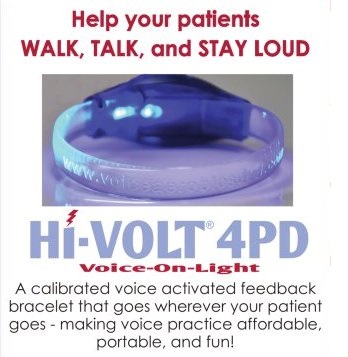 The Voice Aerobics Hi-VOLT® voice-activated bracelet was created in 2015, with the goal of providing a simple external feedback tool for Parkinson’s patients (e.g. “speak loud enough to see the light”) with resulting increase in vocal intensity. The Hi-VOLT can also serve as a feedback tool for targeted training during independent home practice, helping individuals perform vocal function exercises at a high enough level of effort to obtain some strengthening effect.

Why an External Cue?

It is well established that people with Parkinson’s disease (PWP)disease have difficulty performing skilled movement when forced to rely on internal cues versus responses guided by external stimuli. This discrepancy has been attributed to the dysfunctional basal ganglia lacking an adequate, internally generated model causing persons with PD to become overly reliant on external cues to guide skilled movement.

Hypophonia (reduced volume) is a problem for nearly 90% of PWP, and while most patients don’t accurately perceive the volume deficit that exists in their day-to-day conversational speech, most can respond to external cues with an increase in loudness. In doing so,however, they will often report: “this feels really loud, I feel like I’m shouting,” “I can’t talk like this,”  comments which illustrate the sensori-perceptual deficit that PD has caused.

During one:one speech therapy, the therapist is often providing verbal cues to the patient and depending on the approach might be saying such things as: “do it again, speak louder,” “more intent”). And while verbal cues work well in therapy, patients often leave treatment with the intent to practice at home, but in the absence of an external cue, in this case, the therapist’s feedback, they may not perform at a similarly high level of effort.

I began recording the data with a few assumptions based on my experience and review of the speech literature that included:

Acoustic data for 98 PD patients was reviewed. The values that were measured during the two sustained phonation tasks were not normally distributed as determined by the Shapiro Wilk normality test. Subsequently, the parametric, paired-t test would not be appropriate because the values are not equally distributed about the mean. Therefore, the non-parametric equivalent to the t-test, the Wilcoxon signed rank test, was used to compare the median, or middle number of the data, when ranked in order.

Rounding up, the median loudness without feedback was 74.0 dB SPL, and the median loudness when using the Hi-VOLT was 80.0 dB SPL. The increase in loudness that occurred when the patients used the Hi-VOLT is greater than would be expected by chance, and is therefore, statistically significant. The p-value of <0.001 indicates that there is less than a tenth of a percent chance that this increase in loudness occurred by chance, meaning that the difference is highly likely to be the result of using the Hi-VOLT®

Conclusion: Statistical analysis of acoustic data appears to support what I have witnessed clinically for several years, and that is that a simple external cueing device incorporated into an initial speech/voice assessment of  individuals with Parkinson’s disease can quickly and easily demonstrate stimulability for an increase in vocal intensity and help with setting targets for treatment. Unlike verbal cues such as “speak twice as loud,” which patient’s sometimes resist, the Hi-VOLT has never been met with resistance, and a review of the audio recording by the patient helps in demonstrating what’s possible with treatment.

How Can You Use the Hi-VOLT® with Your Patients? 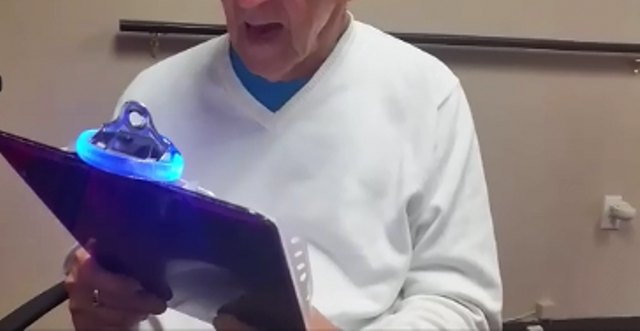 I typically provide patients with a Hi-VOLT® light during speech therapy treatment, regardless of the approach. I encourage patients to utilize the Hi-VOLT when performing the core exercises such as the sustained vowel task. Some patients will continue to use the Hi-VOLT during daily practice, while others will gradually titrate away from dependence on an external cue. I invite patients to take the bracelet out once a week just to re-calibrate to the level of loudness they need to be using when completing home practice.

Because the Hi-VOLT® light is housed within a bracelet, it can go with patients anywhere they go like physical therapy, boxing, or a ride in the car.

(Thank you to my friend and research colleague, Dr. Roxann Diez Gross, for her help in performing statistical analysis on collected data)