Has Parkinson’s Got Your Speech Caught in a Speed Trap? 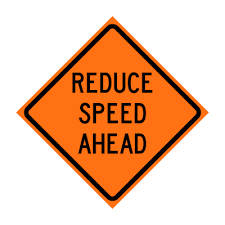 Last week while driving home from work on one of my usual routes, I got caught in a speed trap. When I told a few patients about it, no one was surprised, as they have seen me zipping around in my little FIAT. Fortunately, the police officer was kind, and only gave me a warning, and I drove home the remainder of the way using “intent,” that is, with focus, conscious of the posted speed limit, my foot on the gas pedal, and the speedometer,  (  a reliable external cue if only I had used it)!

So what does a person do when Parkinson’s or DBS (deep brain stimulation) causes the motor speech mechanism to speed up, and speech rate becomes too fast? Speech rate that is altered with rate that is too fast and words running together is referred to as festinating speech.

In Parkinson’s, festination corresponds to a tendency to speed up when performing repetitive movements. It was first described in gait where it is seen as a propensity to lean forward taking rapid, small steps, but festinating patterns can also occur in handwriting and speech. Festination is reported as one of the most disabling symptoms for people with Parkinson’s because it can truly feel like movements or speech patterns they simply cannot control. Tapping, when used as a cueing method to control or manage the festinating speech,  may unfortanately also quickly degrade into a festinating pattern.

A 2012 survey conducted and published by the Parkinson Alliance examined speech disturbances reported by people with PD with and without DBS. The survey reported that there was a statistically significant difference between the DBS and Non-DBS groups on numerous speech symptoms for both older and younger respondents. Specifically, the DBS group endorsed problems associated with hypokinetic dysarthria, including: slurred speech, low volume, festinating speech ,speaking rapidly, initiating speech, and monotone voice.

Since the 2012 survey referred to above, there has been an increased awareness of the potential for a worsening of speech following DBS, and this has led clinicians and researchers to focus more on lead placement and stimulation settings.

Individuals with hypokinetic dysarthria, that includes festinating speech patterns may benefit from speech therapy protocols such as LSVT® LOUD or Speak OUT®. These are therapist guided programs, and while both are very effective in addressing hypophonia (low volume) the impact on festinating speech may be less robust and it may be more difficult  for patient’s to self-monitor and maintain a more normal speech rate pattern outside of a therapy setting. 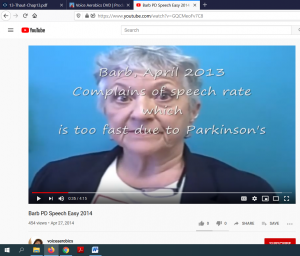 Barb describes her speech difficulty and shows benefit from a device intervention. Click on the image above to hear her story.

In addition to speech therapy, device interventions employing delayed auditory feed-back (DAF) and pacing boards have also been utilized with variable long-term success. Speech Easy® and Speech Vive are two types of device interventions that may be of benefit to some people with speech impairment due to Parkinson’s, and in particular for those who have had limited response or sustained benefit from more traditional speech therapy approaches.

Visit my website: https://voiceaerobicsdvd.com/  to learn more about therapy for speech or swallowing problems as well as device interventions for people with Parkinson’s and related disorders.

Although there have been improvements in the management of motor symptoms, it remains of great importance to continue research focused on understanding the experience of motor symptoms through the eyes and voice of the person with PD so we can improve treatment approaches.  Further, it is important to assess the presence of motor symptoms within specific subgroups, including, but not limited to, tremor predominant subgroups and axial-rigid (stiffness and changes in coordination stability) predominant subgroups in relation to age and disease duration, and to evaluate the impact of these symptoms, whether individually or combined, on quality of life.

There are two ways to complete the survey: Online and Paper & Pencil and the paper option includes a prepaid, return envelope.

Please be advised that this survey is now available on-line! The direct link is:  https://www.surveymonkey.com/r/Z2QFB6H

There is still time to register for the Parkinson’s Expo being held at the Bradenton Area Convention Center Saturday February 29, 2020. This event expects over 1400 people in attendance. The day long event is free, and I’ll be joining you after lunch for some fun vocal stretches. To register visit: https://www.eventbrite.com/e/2020-parkinsons-expo-registration-71513068513