A Friendship Borne out of Parkinson’s disease

In Memoriam of Kate Kelsall

Kate Keslall was an award winning Blogger, Parkinson’s and DBS advocate, and my dear friend who died July 29, 2018 after a courageous life with Parkinson’s disease. 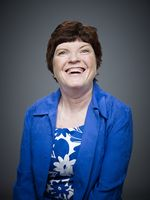 Can anything good ever come from Parkinson’s disease, you might wonder?  There’s no question that (PD) it is a chronic disease fraught with many challenges. But, in 2008, Parkinson’s was the conduit that brought me to my friend, Kate Kelsall.

In the fall of 2008 when my website went live for the first time, I contacted several individuals and organizations within the Parkinson’s community to offer them a complimentary copy of my newly released Voice Aerobics® DVD. I sent a copy to Kate, who at that time was already writing a blog about her experiences living with Parkinson’s, and she quickly responded. I can’t even tell you what it was that clicked with me and Kate, but quite soon after that first email, we developed an online friendship. In February of 2009, we met face to face for the first time when Kate joined me on a Parkinson’s educational cruise. Those few days spent together at sea sealed the deal. Whether it was because Kate laughed at my jokes, joined me in any attempt to improve speech and voice, or her social work background that made her such a good listener, it was obvious we were going to be BFF’s. I am sure that over the 10 years of our friendship, I complained to Kate about the mundane issues of my life much more than she ever complained to me, but, she never judged, always listened, and when appropriate provided helpful suggestions. As our friendship grew deeper, she became a confident, my muse, and my “go to person” for all things Parkinson’s

Kate and I emailed at least daily, sometimes several times a day. And although from time to time she would discuss some of her struggles managing symptoms of Parkinson’s disease, more often, she would talk about a dance recital coming up (she danced with the Rockyettes, a local dance troupe), about her rescue dog, Rusty, her husband, Tom, or about a patient and family she had accompanied to DBS surgery. Kate was a champion of DBS, forming and leading a DBS support group in her home town of Denver, and writing honestly about her experiences with DBS on her blog.

Since St. Blaise was the patron saint of throat ailments, we thought it an appropriate day to share some of the insights we each had gained as we viewed Parkinson’s from two different perspectives. I’m not sure if it was some type of friendship osmosis, but it seemed that over the years of knowing Kate, I  became a better writer, and so, we started talking about  a  goal we wanted to achieve, which was to consolidate some of our blog posts into a booklet that could be of interest and help to people living with PD and the professionals who care for them.

Sadly, before that goal could be realized, Kate began to experience a decline in her physical health. Her speaking voice had been getting weaker for some time making a phone conversation nearly impossible, but by the spring, she was no longer writing emails to me, and her absence from my life was already beginning to be felt.

The loss of her speaking voice to Parkinson’s was one of Kate’s nemesis, but her written voice touched hundreds of people, and it is the written word, after all that can empower us for a day, or  stay with us forever.